The biggest factor facing the longevity and efficiency of cooling fan motors inevitably concerns the ability of equipment to handle demands of friction and heat stress. A cooling dc fan motor could theoretically be in operation around the clock and in place for a longer overall lifespan than most other industrial equipment. 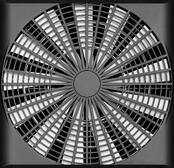 Finding the right balance of power and cooling ability, counterpoised by energy efficiency and maintenance cost are key. It can be a daunting task, especially if the fan is responsible for cooling critical equipment. But, by following the steps below, you can be confident that you’ve made the right choice.

How much heat is the system estimated to generate? How many cubic feet per minute (CFMs) of air will need to be moved by a cooling fan to reach and maintain a proper, functional operating temperature?

Thermal resistance, surface temperatures of mechanisms within a unit, the temperature of fluids within an apparatus and their expansion potentials, and failing point of materials are all focal points when deciding on the proper cooling fan.

When conducting thermal analysis, the temperature source should be accounted for typical and worst-case scenarios. Once this is determined, an effective air–flow requirement can be established.

As air is taken into and exhausted from a cooling fan and therefore removed from equipment, a cooling system will lose air pressure. System Impedance is simply the sum of pressure drop throughout a system.

The more air paths—e.g. the more exhaust venting, intake valves, and overall system length and complexity within a cooling system—the greater the margin of error for controlling system impedance rises. Determining overall capacity and integrity of a cooling fan and connected systems will further enable efficient determinations of static pressure and needed ventilation can be established.

3. Determine if you actually need a fan, or if a blower makes more sense

Air flow and pressure dynamics are the biggest considerable differences between choosing a fan or blower system. Blowers operate against a high-pressure gradient and deliver air flow perpendicular to the blower axis.

In contrast, fans work against low pressure environments and produce high air flow rates parallel to their fan blade axis. Blowers create much higher air pressures and are generally much louder than fans. Blowers can be gear–driven air pumps and are most effective when dealing with a disparity of air pressure in an application.

Whether a fan is oriented centrifugally or axially is also a concern when choosing the proper cooling fan motor.

Centrifugal fans produce markedly higher air pressures and can handle more hostile operating conditions such as extreme heat or dryness. Physical strains placed upon units by virtue of their design, though, such as vortices or tip leakage flow can be problematic.

Axial fans, those which work like an airplane propeller, create an aerodynamic lift which pressurizes air. Although these fans are usually cheaper, smaller, and lighter than their centrifugal counterparts, they typically are noisier and can generate considerable vibrations which can be costly to manage. These vibrations could additionally add strain to the operation of the unit.

The characteristics of each fan are represented graphically as performance curves. Curves can be developed for a number of conditions, including fan volume, system static pressure, fan speed, and brake horsepower.

The intersection of the system curve with the static pressure curve is called the operating point. Power requirements are determined by plotting the operating point to the power curve. A fan’s performance curve should match the proposed operating point, so that the fan will sufficiently cool your system.

5. Choose a fan that fits your design

The last step is the easiest: choose a fan with the right size, weight, and design so that it can be integrated into your system.

If you need more assistance in choosing the right cooling fan for your application, download our extensive eBook on the topic: