To help clear up that confusion, here is a breakdown of the fan types, their benefits, and their uses.

The design and function of a centrifugal fan is very different from those of an axial fan. Their differences make them each suited for different applications and customers are sometimes unclear as to which fan type will best suit their needs. 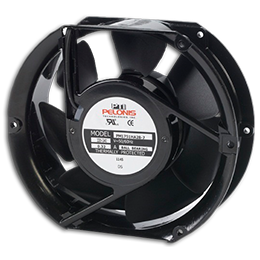 Axial fans date back to the horizontally configured windmills of Europe in the Middle Ages. The first electrically powered fans, introduced in the 1880s, were axial fans.

Axial fans are named for the direction of the airflow they create. Blades rotating around an axis draw air in parallel to that axis and force air out in the same direction.

Axial fans create airflow with a high flow rate, meaning they create a large volume of airflow. However, the airflows they create are of low pressure. They require a low power input for operation. 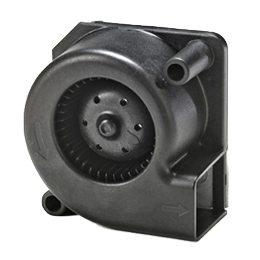 The centrifugal fan was invented in 1832 by military engineer Lieutenant General Alexander Sablukov of the Russian Empire’s Imperial Russian Army.

Because of the low-pressure high-volume airflows they create, axial fans are best suited for general purpose applications. For example, they excel at moving air from one place to another, cooling confined spaces such as computers, and cooling larger spaces such as work spaces.

A standard AC model is energy efficient, using no more than 100 watts when on high speed. AC fans can be connected directly to a DC power source, such as solar panels or batteries. Since the end goal in units like vending machines is an even flow of cooling power, an AC fan is the fairly obvious choice.

Currently, vending and refreshment industry leaders are trying to get the new generation excited about their services. As the new, hip crowd grows up attached to their technology, the industry is finding new and exciting ways to get their attention.

And just like any computer you might have in your office, overheating becomes a larger concern with all this technology is included in the new designs.

With demanding technological features, you can see a drop-off in performance due to heat. AC fans are an excellent choice to maintain just the right amount of cooling for these components.

It’s for all these reasons, that we created the PM1225-7 series axial AC fan.  Axial AC fans are used extensively in vending machines to provide cooling where enclosure space is limited.

Because of the high pressure they create, centrifugal fans are ideal for high pressure applications such as drying and air conditioning systems. As all of their moving parts are enclosed and they also have particulate reduction properties that makes them ideal for use in air pollution and filtration systems. Centrifugal fans also offer distinct benefits:

Even within the categories of axial or centrifugal fans, there is a great amount of variation between models, all suited for different uses.